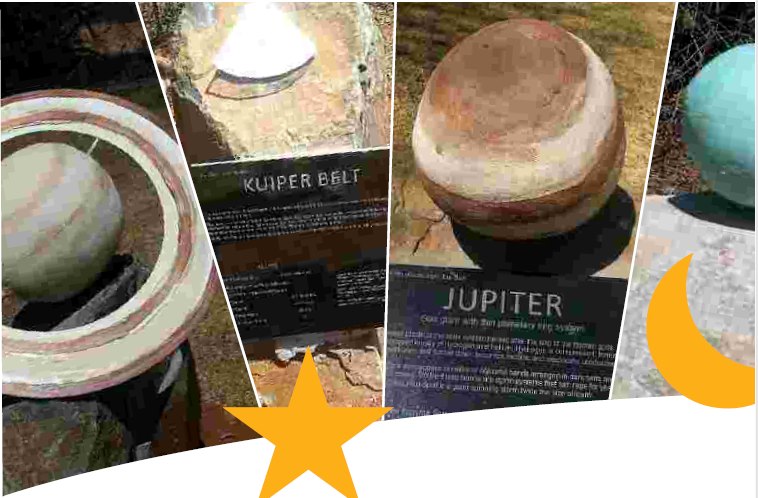 Planet walk is now in action

The launch of the planet walk was well organised by Johannesburg City Parks, Rotary and the West Rand Astronomy Club.

The following articles amongst others covered the event:

“See the solar system at the Kloofendal Reserve” and “West Rand Astronomy Club and City Parks team up at Kloofendal“.

See our main page for events organised by FroK.

Star-gazing events are offered by the West Rand Astronomy Club at Kloofendal in winter each year.

Courtesy of the Rotary Club of Roodepoort

The planets walk was built with assistance from sponsors from an idea that one of the members of the Roodepoort Rotary Club picked up on a visit to a small town in France. Rotary worldwide undertake many charitable and community service projects and the Roodepoort club is no exception, we have placed libraries in under privileged schools, we help old age homes, arrange an annual holiday for under privileged kids etc. but we wanted to do a public service project that was in the public eye and the Planets Walk seemed ideal.

The walk is situated in the Kloofendal Nature Reserve in Roodepoort, the nature reserve as well as being a reserve also has a natural amphitheatre and the walk is situated around the amphitheatre – a total distance of 500 metres. The reserve also has historical significance and contains a national monument commemorating the discovery and the first mining of gold in the Witwatersrand in 1884 two years prior to the discovery of the main reef in Langlaagte

The walk is primarily an educational experience and also of general interest. The project works on two scales, the distances of the planets from the sun and from each other is to a scale matching the average distances in nature, the scale used is 1 metre = 10,000,000 kilometres, thus the earth is 15 metres from the sun representing 150,000,000 Kilometres. The second scale is the sizes of the plants in relation to each other and to the sun, the sun is represented by a 2 metre diameter steel tube sphere which doubles up as a kids’ climbing frame. Thus the earth is represented by a sphere that is 17,000 times smaller than the 2 Metre “sun”.

The planets are mounted on quarried rocks and each has an engraved granite plaque describing the planet and including statistics such as distance from the sun, size comparisons to the earth and other interesting information.

The walk is intended to be a self-guided walk but is also an ideal opportunity for teachers to orient children on what the solar system looks like in reality.