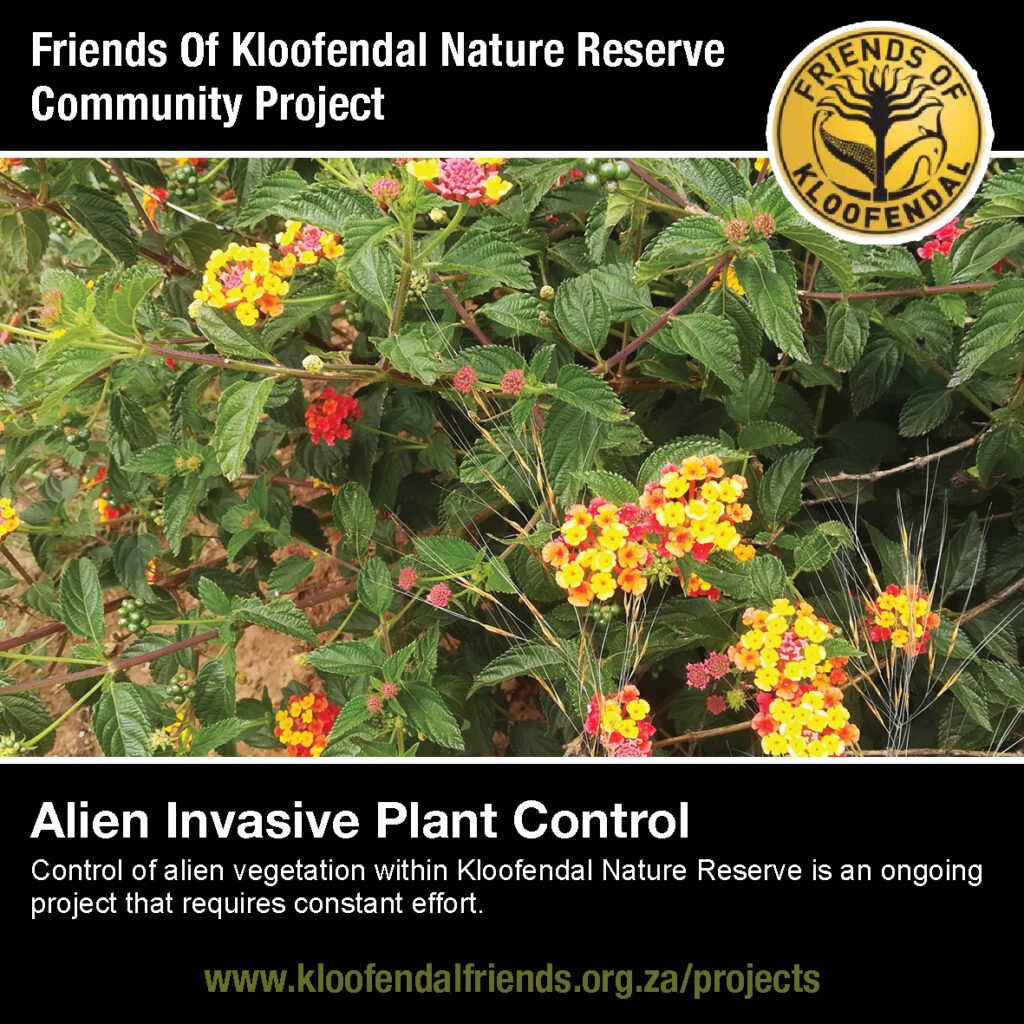 Control of alien vegetation within Kloofendal Nature Reserve is an ongoing project that requires constant effort. There are 2 groups working on alien plant control on an ongoing basis.

FroK Weeding team – meet on Wednesday and Friday Mornings for 2 to 3 hours, starting at 7:00am.
Johannesburg City Parks and Zoo provided us with EPWP (Extended Public Works Programme) people before the 2021/22 summer rains started.

Alien invasive plant control involves physically removing and cutting invasive plants under supervision. Participants will learn to identify indigenous and the declared (illegal) alien plants and how we control the aliens.

Do you want to help your community?

For any information on these projects, or to find out how you can contribute to conservation and help your community please phone/ WhatsApp us on 079-693-5608 or email kloofendalfriends@gmail.com

WHY REMOVE ALIEN INVASIVE PLANTS? WHAT HARM DO THEY DO?

Antibiosis – making soil and water around them toxic to our native plants e.g. Black & Silver Wattle

Many Alien Invasive Plants are toxic to our native animals, so they do not get eaten. If animals do eat them, they can die (Cestrum species).

Many are harmful in other ways such as toxic fumes and sap (Cestrum laevigatum), allergenic hairs such as Bugweed

They utilize our native plants when young, the native plants protecting them from the elements such as fire, wind, frost, and then out compete them

Their roots can be so intertwined with the surrounding native plants, it looks like strangulation, competing in water and nutrients absorption from the ground (Lantana camara)

Their rapid growth changes the natural environment, changing the natural veld habitat, causing the native smaller species to die, such as sun loving grasses being replaced by  shady AIP forests

They have a prolific underground suckering system (vegetative formation of a new stem and root system from an adventitious bud of a stem or root) such as Cestrum laevigatum, Black and Silver Wattles

Long lived seeds in the soil, which can germinate after many years and are not eaten by insects

The increase of biomass (many woody trees) causes very hot fires, which cause death of underground ecosystems, ground becomes dry, no roots to hold the soil, so erosion sets in, adversely affecting water quality lower down.

(iii)               They reduce stream flow, reduction in ground water which leads to reduced dilution of pollutants, suspended solids and a greater concentration of nutrients in the water, killing life in the water.

An AIP infestation such as Lombardy Poplar, Syringa, Black and Silver Wattle has a severe effect on amount of water in our streams and can totally dry out the stream.