Steve trying out our recently acquired large tree popper.  Steve and Karin pulled out some mature Blackwood trees and some of their associated suckers.

Friends of Kloofendal Invasive Alien control project is in recess at present (November 2018) due to: 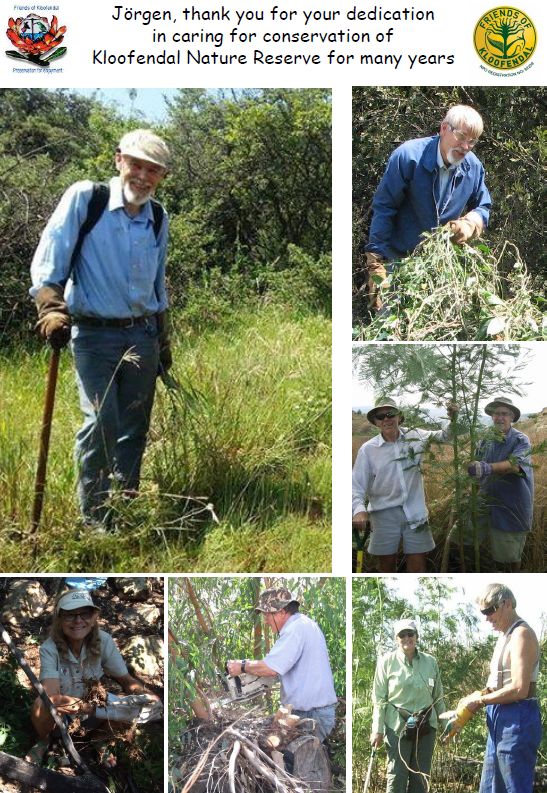 For years the late Jörgen Hammerström was a dedicated member of FroK’s Invasive Alien Plant control team, Here are parts of FroK’s tribute to him at his memorial service in December 2017 after he past away from cancer of the lungs.

Thank you Monica for allowing us to give tribute to Jörgen for his dedicated work he has done in the Kloofendal Nature Reserve over many years in dealing with problem invasive plants, most of them declared by law to be removed, some not declared.

Not only did Jörgen and Monica choose to buy their house overlooking the Kloofendal Nature Reserve, but Jörgen has played a huge role in preserving the veld in the Reserve. He is a fine example of someone who actively cares for his local environment.

As part of the FroK committee, Jörgen’s position was invasive alien plant control. This important portfolio initially was held by Doreen Wood with John Hill’s assistance, then John Roberts and then Jörgen for the last six years. Besides the monthly meets, Jörgen would, on his own, spend many days, working in the reserve, walking around, discovering where the problem plants were and discovering new ones with Doreen and Karin’s help in identifying them. He experimented with different ways of eradicating the problem plants – manually, cutting off the flowers and seeding parts of the plants, pulling and digging them out, slashing, ring barking, cut and poison, so many ways.

Evidence of Jörgen’s work: Many a dead alien tree, standing amongst our indigenous plants in Kloofendal, shows where Jörgen has been at work, where his experimenting with herbicides and diesel has worked. We also see fewer invasive plants crowding the indigenous plants out.

Five people from FroK attended a two-day course of Invasive and Aline Plants (IAPs) presented in Kloofendal on the 25th and 26th July 2016. Download a poster (2.3Mb) we prepared to share at this course: Invasive and Alien Plant control by the Friends of Kloofendal (FroK)

Some 74 species of invasive plants can be found in the Reserve. A 9.2Mb file with a draft list, illustrated with numerous photographs, areas generally found in the Reserve and recommended treatment can be downloaded from: COMMON PROBLEM INVASIVE PLANTS IN KLOOFENDAL NATURE RESERVE.

The EPWP men finished their contract with JCP Friday 25th July (2014) and as promised by FroK, they each received a certificate of competence in identifying alien invasive problem plants in Kloofendal and distinguishing those plants from indigenous, non-problem plants. They also had to know how to remove the problem plants. They each were given a test on Friday 27th June in which the men had the opportunity of showing what they had learnt in their 3 months work period in Kloofendal.

The certificate event was made special by FroK providing cake and fruit juice, and each of the men was called forward to receive their certificate and a letter of recommendation from Steve Spottiswoode, our FroK chairman. 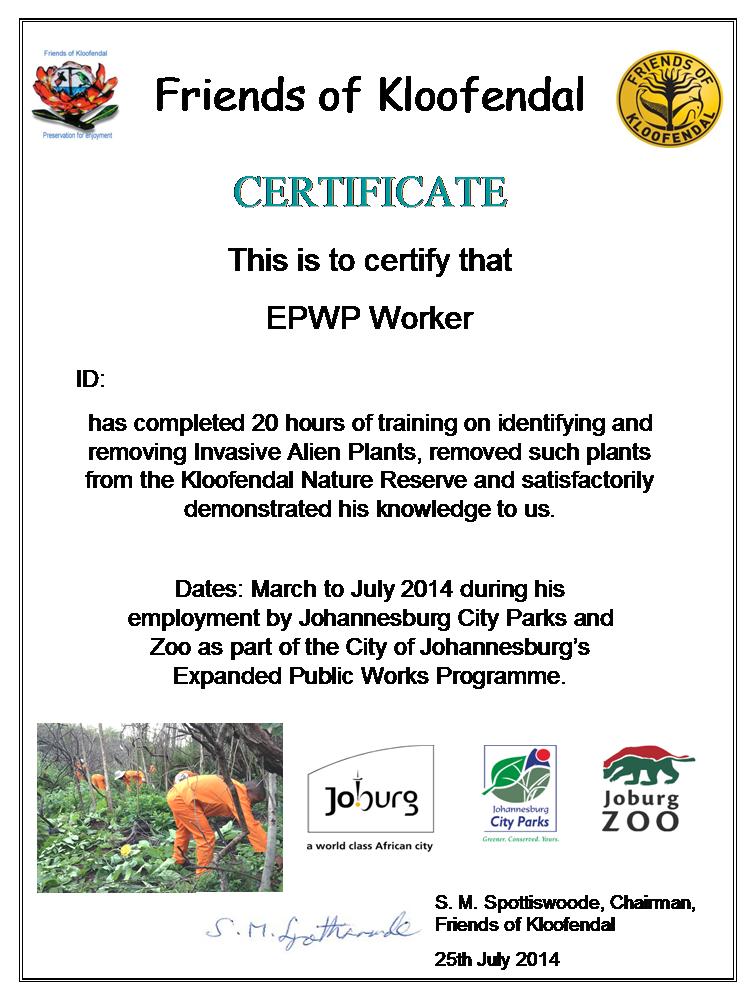 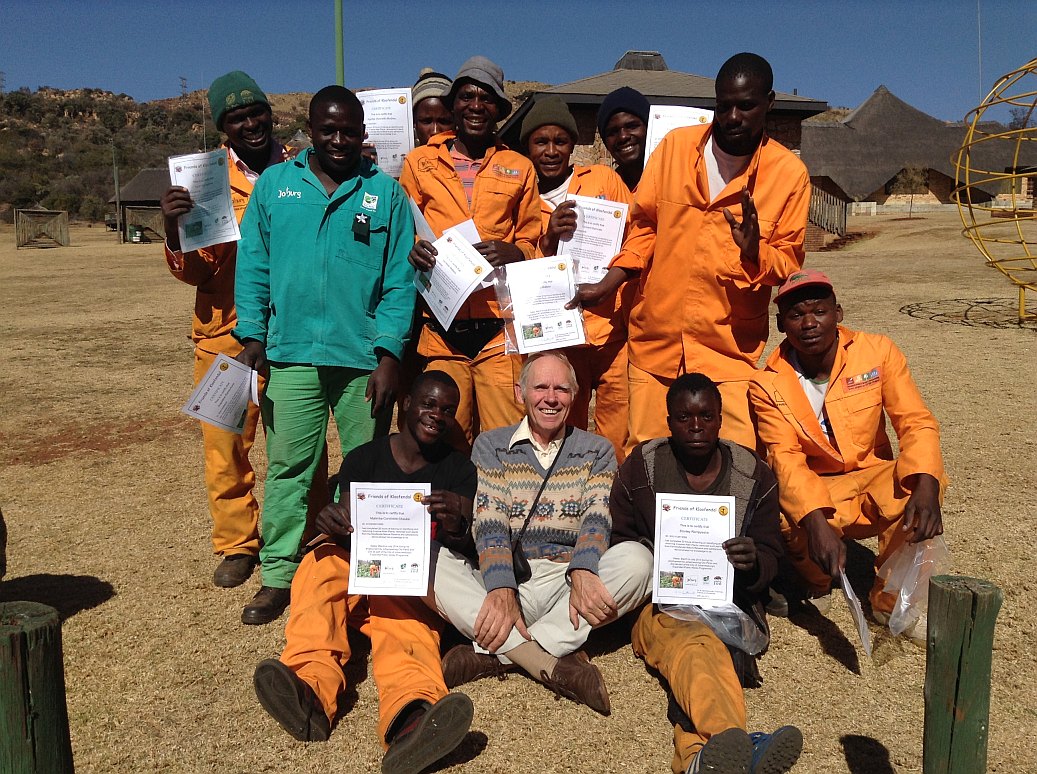 This file was sent to City Parks management on 5th May 2014 with a covering email that read:

“We are sending out a FroK newsletter this week. Can you give us something positive to put in it in response to the attached document?”

We were hoping that City Parks would respond in some positive way, but the email was read and no answer has been received to date (4th June 2014).

We have been told unofficially that we can continue using the EPWP people to removed alien plants in the Reserve. This has not been easy as their City Parks manager is rarely to be seen and is of little help when we take them into the Reserve. We have needed to buy tools as they are inadequately equipped. 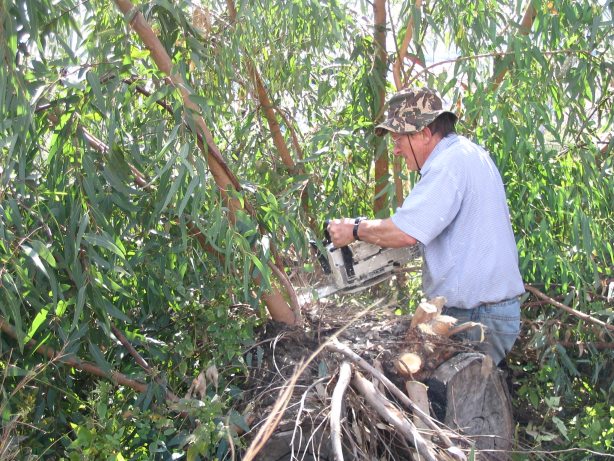 Progress has been good in some areas, such as below Swift Street.

Please join us on our regular work meet on the second Saturday of every month.

Document with pictures of most of the Declared Invasive Alien plants in the Reserve. This largely supersedes the table below.

Map and table used to plan their work over the next two months.

We are planning to issue certificates to each person based on knowledge and the amount of work done.

List drawn up by Karin Spottiswoode with help from Doreen Wood

“Working document – not complete yet. March 2011

Over the past five years the FroK invasive hacking team has done a lot of work on the highlighted species.